Being safe at height is good for business 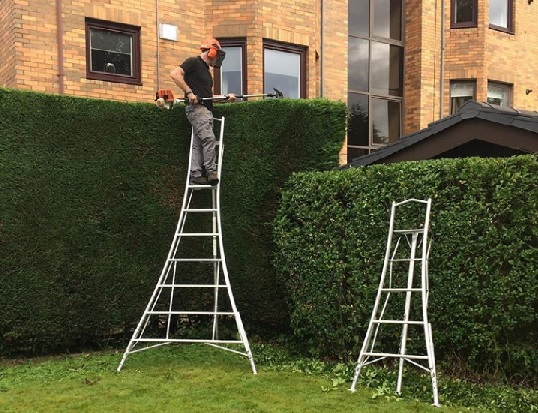 Discovering Henchman has been a game-changer for Scottish landscape gardener Stevie Robertson, owner of SR Landscapes in Coatbridge.

Stevie started his landscaping career at the age of nine when he helped out at his local Kirkintilloch Golf Club eventually working his way up to becoming the head groundsman before setting up his own landscaping business.

For over 40 years he’d been using traditional ladders to trim hedges, but joining Instagram in 2017 opened his eyes to the whole world of Henchman tripod ladders.

He explains: “ I started seeing pictures posted by tree surgeons on these three-legged ladders  and was really taken by them. There’s a whole community of professionals who just love their Henchman.  I never knew such a product existed and to be honest I was getting more and more unhappy about the risks me and my cousin who works with me were taking cutting hedges.”

“The dangerous ways had become a habit – we were just used to one of us wobbling on top of an A-frame ladder passing the cutter up and down to the other who was standing at the bottom trying to keep it stable.  When you started stretching out it became really dangerous – we could have easily fallen off and broken something but luckily we didn’t.”

So Stevie went to his local garden machinery shop and found a ten-foot Henchman on sale.

“I wanted it but couldn’t afford it at the time as I limit the amount of cash I spend going into autumn, but kept going back and back checking it was still there. Nobody had bought it until the day came when we were able to agree a price and the Henchman was mine!”

It was a purchase he wished he had made much earlier – and so thrilled with the big one he has added a smaller six-foot tripod to his collection.

“My Henchmen ladders have completely changed the way we work.  I can cut hedges cut far quicker so we can take on more work. I’ve created a little workstation on top of the platform where I can hang my tools and the fact that I can lean out as far as need to against the top rail  holding the cutter and feel very stable makes such a huge difference.

“The wee ladder fits perfectly in my van and in fact I have been pleasantly surprised at how far it extends because of the three adjustable legs.

“I won’t use anything else now and really enjoying sharing pictures of our Henchmen in action and being part of the Henchman Instagram community.”

You can see SR Landscapes in action on Instagram – fgm_f20 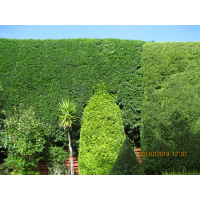 We have a spare for that