The store will not work correctly in the case when cookies are disabled.

Henchman on tour with English Rugby 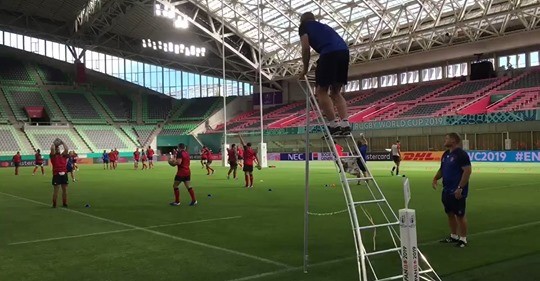 As fans of all things rugby, we’re really enjoying the Rugby World Cup, and particularly proud that one of our Henchman tripod ladders went to Japan with the England squad for line-out training.

Footage of a Henchman in action during one of forward coach Steve Borthwick’s training sessions has been trending on social media and even ITV commentator Nick Mullins mentioned the team’s new training aid on air during the match against USA where line outs were, in our humble opinion, simply outstanding - see it here

When we first designed the Henchman tripod safety ladder rugby wasn’t uppermost in our mind, but in fact it could almost have been made specially for this purpose. Designed to be the safe alternative to a traditional step ladder on soft, uneven ground, we can see our product certainly ticks all of the boxes when it comes to lineout training.

When we saw  a video clip of the England forwards using a step ladder during training for the 2019 Six Nations tournament, we saw an opportunity for us to pack up and send a  10ft Henchman with three adjustable legs to coach Steve at England Rugby’s Penny Hill Park training ground with our compliments.  It was an easy conversion.

He was really impressed by Henchman’s performance and our ladder has become and integral part of the team’s training regime. We reckon if our ladder was a player it would have been one of the swiftest trial to first team selections in history.

Henchman ladders have a wide stable base with splayed feet to prevent sudden sinking in to grass.  Their broad platform ‘crow’s nest’ with a top safety rail designed specifically to be leaned into ensure a safe and stable training platform for even the most vigorous line-out practice.

Now the word is out, Gallagher Premiership clubs have followed suit with London Wasps, Northampton Saints and Gloucester Rugby all adding a Henchman to their training regime.

We’re really looking forward to the rest of the World Cup and the start of the 2019 Premiership rugby season.

Which Ladder Do I Need?

A guide to ladder safety and working at heights at home